I am delighted to get you acquainted with the municipal unit «Krasnoyarskiy district» of Astrakhan region, the history of which begins from the Golden Horde period, and its geographical position and resources shows its investment attractiveness.

Krasnoyarskiy district is situated in the western part of the Astrakhan region in the Delta of the Volga river, it has its borders with Kharabalinsky, Privolzheskiy, Narimanovskiy, Volodarskiy districts, in the east it has borders with Kurmangazinsky district of Kazakhstan Republic. The general square is 526 000 ha. Geological structure of its resources determines formation on its territory different natural resources: gas, gas condenser, sulfur, brick clay, engineering underground water, iodine, salt.

The municipal unit «Krasnoyarskiy district» consists of 51 population communities, united into 16 village councils. The population of the district is 35954 persons.

The modern Krasnoyarskiy district is industrial and agricultural district of Astrakhan region, across the territory of which the trade ways in Russia, South Caucasus and Europe from the Central South Asia pass. In the district Astrakhan gas condenser deposit is investigated, agro industrial complex is developed, objects of industrial and social cultural significance are constructed, national projects are realized. The great advancement of Krasnoyarskiy district is its closest position to the regional center and its neighborhood with Kazakhstan Republic, location of roads and railway stations, allowing to carry out the cargo trans-ship operations. At the territory of the district 328 juridical persons, 430 subsidiaries and separate divisions, 622 individual entrepreneurs carry out their activity,  312 enterprises in the retail, 91 subject of catering, 82 subjects of community services providing function.

Developed at the present time policy of creating the comfortable investment climate, the readiness of the district administration to the profitable cooperation, directed to the continuous growth of economics and strong development of the social sphere of municipal unit can help to evaluate the attractiveness of the territory for business development. I invite business people to profitable cooperation. I don’t doubt that in Krasnoyarskiy district you can find reliable partners, faithful friends, the place of realization of your business plans, business ideas and projects.

N.I. Baytemirov,
The head of the municipal unit «Krasnoyarskiy district» 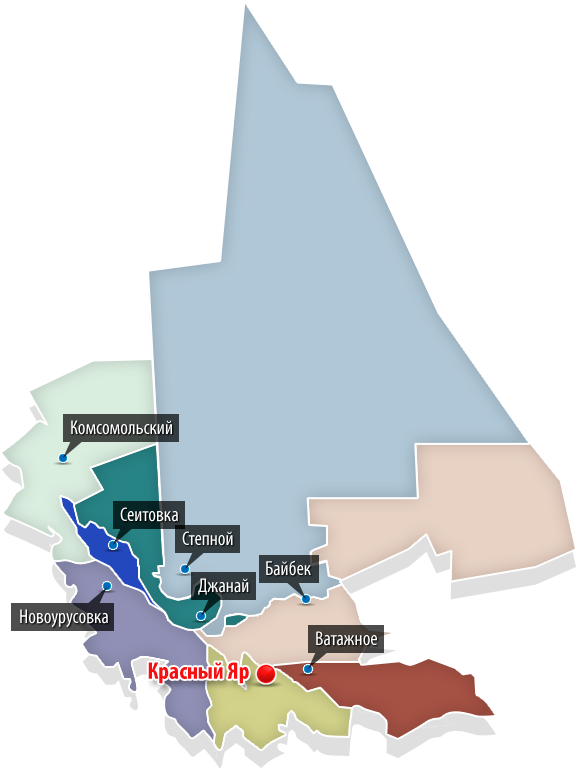